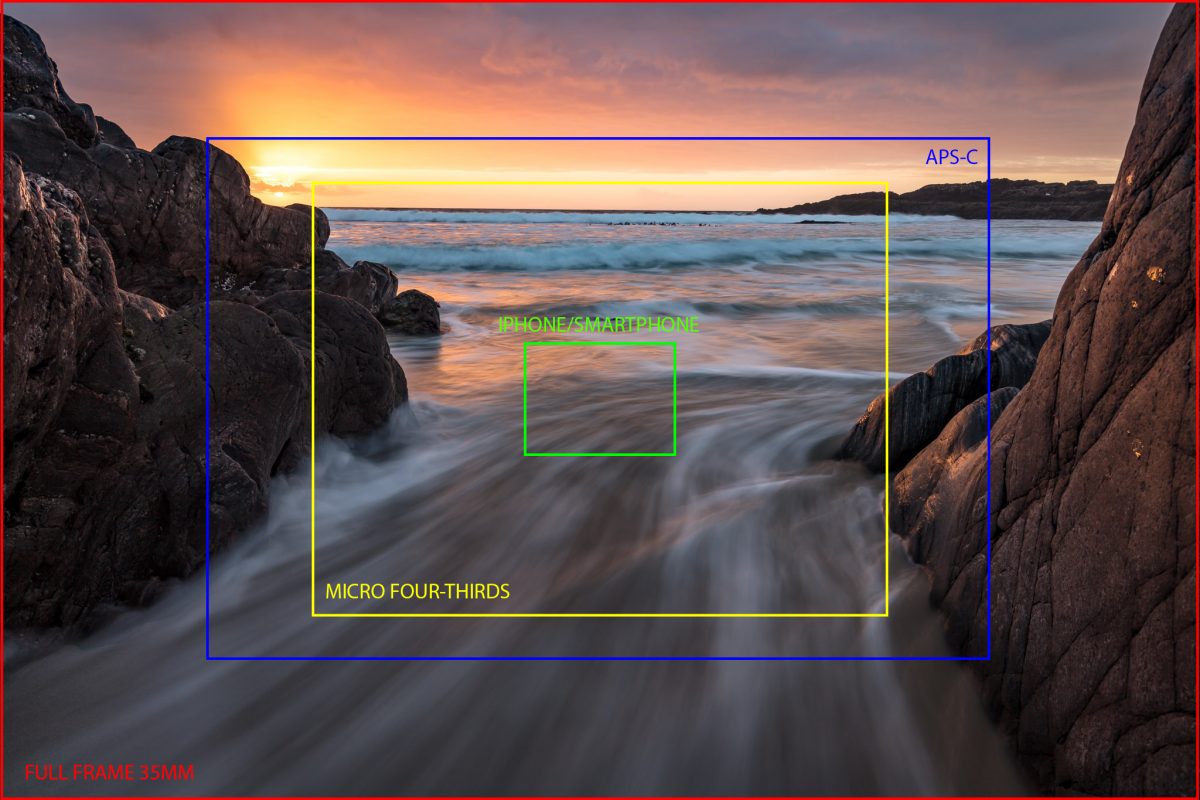 You’ve probably heard professional photographers raving about how good full-frame is compared to a crop sensor camera, and for anyone in the market to buy a DSLR, or indeed mirrorless camera you’ve probably come across these terms. What do they actually mean though, and how will they impact on our photography and on what we decide to buy?

A full frame digital sensor refers to to the negative size of a 35mm film camera. These dimensions are 36mm x 24mm. This gives the aspect ratio of 3:2 (three units wide compared to two units tall), which is the ratio most DSLR cameras shoot in.

By definition, a crop sensor is anything smaller than these measurements. The most common of these are APS-C and micro four thirds. APS-C sensors are around 22.5mm x 15mm in size, so still retain the same aspect ratio of 3:2. Micro 4/3rd sensors, which are found in a lot of mirrorless cameras, have a physical sensor size of around 18mm x 13.5mm. This gives them an aspect ratio of 4:3 which is obviously squarer than 3:2.

Having defined what the difference is physically between different sensor sizes, how does this actually affect our photography, and the images we take?

The first and most obvious effect of is how much of a scene they are able to capture (field of view). For any given focal length, a smaller sensor will capture a smaller area of the scene. For example, using a 50mm focal length lens on both a full frame and micro 4/3rd sensor will allow the former to capture around double the angle of view as the smaller sensor. Think of using a crop sensor as taking a photo on a full frame camera but only being able to see the central 50-80% of the image. The remaining peripheral areas are never captured by the smaller sensor.

When we view our images (either on the camera’s screen or on a computer), those taken on a crop sensor need to be magnified to a greater degree in order to fill the screen. For this reason, crop sensor cameras appear to magnify the image compared to shots taken at the same focal length on a full frame cameras. This effect is known as the crop factor and is measured as a degree of magnification. The majority of APS-C sensors have a crop factor of ~1.6x, whereas 4/3rd cameras have a crop factor of around 2x.

How does this translate in the real world? If we use a 50mm lens on a full-frame camera then to get the same angle of view on an APS-C sensor, we would need to use a 35mm lens. This has an influence on the depth of field in the image, which can either be seen as an advantage or disadvantage, depending on what you are looking for. The shorter the focal length of a lens, the greater the depth of field it produces. So by using a 35mm lens on a crop sensor, we achieve the same field of view as we do with a 50mm lens on a full frame camera, but due to the shorter focal length, the depth of field will be greater for any given aperture.

If shooting a landscape where maximum depth of field is required, this is clearly a benefit for a crop sensor using the shorter focal length lens. If however we are shooting a portrait and are trying to achieve a shallow depth of field, then the full frame camera with the 50mm lens will be the better tool for the job.

Another major influence is in the magnification factor. Let’s assume we are using the same focal length lens on both a full frame and a crop sensor camera. If we are shooting sports or wildlife subjects, then the chances are we will want all the reach we can get out of our lens. If this lens happens to be a 70-200mm, then at 200mm the subject will appear larger on the crop sensor than it will on a full frame sensor.

For example, if we use a 70-200mm lens on a APS-C sensor, it has the same field of view as a 100-280mm lens on a full frame camera. So smaller sensors could be better for any situation where you need more reach out of your lenses. At the other end of the scale however, a 16mm super wide angle lens being used on a crop sensor isn’t actually that wide (equivalent to around 26mm on a full frame).

So for the two examples we have looked at so far, for every advantage there is a disadvantage at the opposite end of the scale.

There are, however, a couple of other influences which see full frame cameras firmly having the advantage, with no opposing factors to even the scores for the crop sensor cameras.

The first of these brings us back to the magnification differences. The larger the sensor, the less the image needs to be magnified to achieve a target size. For example, some medium format film ratios are 17cm wide, so to obtain an 60cm print we only need to enlarge the image 3.5 times to get desired result. Take the same image on a 4/3rds digital camera and we now need to enlarge the same image 33 times to get the same size print. This is a magnification of almost 10 times more, and by doing so we also magnify any impurities in the lens by ten times. So to get a like for like image quality between these two examples, we would need a lens which was 10 times sharper on the 4/3rds camera. That’s a lot to ask and in reality would never happen.

The second influence relates to something called pixel density. If we have both a full frame and a crop sensor camera of 24MP (24 million pixels) then obviously to fit all the pixels on the smaller sensor they need to be smaller in size and packed closer together. Larger pixels capture more light and produce better quality images in high contrast or low light situations. So expect noise levels to be higher on smaller sensor cameras.

Understanding the complexities and mathematics of different sensor sizes for many of us is irrelevant, as long as we understand the simple impacts that each has on our images.