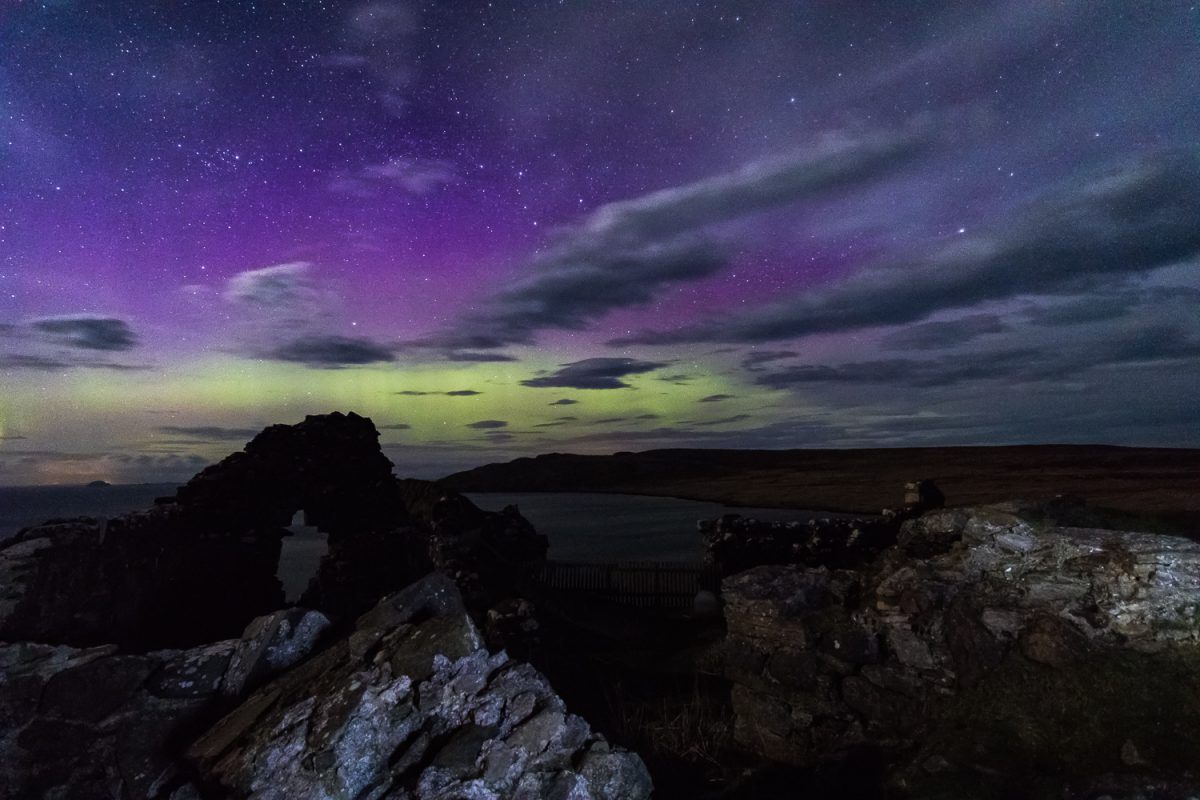 All over Scotland there are tales of faeries, daemons, kelpies and monsters, and the Isle of Skye is no exception. With place names such as the Faerie Bridge & Pools, it’s little surprise that superstition has played a big part in the islands culture. One place in particular has more than its fair share of stories, Duntulm Castle in the north of the Trotternish Peninsula.

Duntulm Castle is thought to stand on the site of a prehistoric dun, or broch, but there is no archaeological evidence to support this (with it thought that the castle destroyed what little evidence there may have been). The castle itself was built over the 14th and 15th centuries, during a time when the Macdonalds and MacLeods were feuding viciously over the rights to the Trotternish Peninsula. By the 16th century the Macdonalds had gained the upper hand, and several additions were made to the castle to increase its defensive capability. While only the vaults of the tower are left, it once stood to four-storeys high and would have been an impressive sight to any would-be attackers.

The Macdonalds of Sleat resided at Duntulm Castle until 1732, when it was subsequently abandoned with a new residence being built five miles away at Monkstadt. Much of the stone from the castle was scavenged to provide material for the new house. Why Duntulm was abandoned remains a mystery, but it is said that it happened after a nursemaid accidentally dropped the baby son of the clan chief from a castle window above the cliffs. The ghost of this nursemaid, killed in retribution by being set adrift in the North Atlantic on a small boat, is said to still wander the ruins, accompanied sometimes by the mournful cry of that baby.

That isn’t the only ghost who still calls Duntulm however. The nursemaid is also kept company by Hugh Macdonald. Hugh MacDonald was the cousin of Donald Gorm, the 9th chief, and planned to kill his cousin and take his place as chief. He sent a letter of instruction to an assassin he had hired, and another to the chief asking for his attendance at dinner. Unfortunately the letters were mixed up, his plot discovered Hugh went into hiding on North Uist. He was eventually captured in 1601 & thrown into the dungeon at Duntulm, where he was left to die with nothing but a plate of salty beef and an empty water pitcher to torment him. Not surprisingly, he went mad before he died. His ghost is said to wander the castle ruins, screaming madly. The ghost of Donald Gorm himself also haunts the castle, where he is said to fight with other ghosts – a reflection on his character while alive.

One other ghost is said to regularly appear, that of a lady whose husband rejected her after losing an eye in an accident. The story of this lady, Margaret Macleod, ties into the story of the last clan battle seen on the Isle of Skye – the one eyed war.

Whether you believe in ghosts or not, Duntulm Castle has a rich history in a beautiful setting. Its northerly location on the island also makes it an ideal place to watch the northern lights, if you can brave the ruins at night that is! I’d had an idea for a photograph in my head for about a year through one of the windows of the castle, framing a view of the northern lights, and only recently had a chance to try it out. I headed up to the ruins back in April with team member Niki and was secretly glad I didn’t have to stand in the ruins alone! I wasn’t sure how active the aurora would be but we were treated to a relatively good display, with shimmering and flashing colours to the naked eye. It gave me the perfect chance to try out my idea for an image, and as you see can below it worked pretty well!

If you’d like to photograph the northern lights on Skye they are visible from October through to late-April. Get in touch if you’d like one of our award-winning team to take you out to some spectacular locations from which to photograph them, and tuition to help get you the best shots possible.