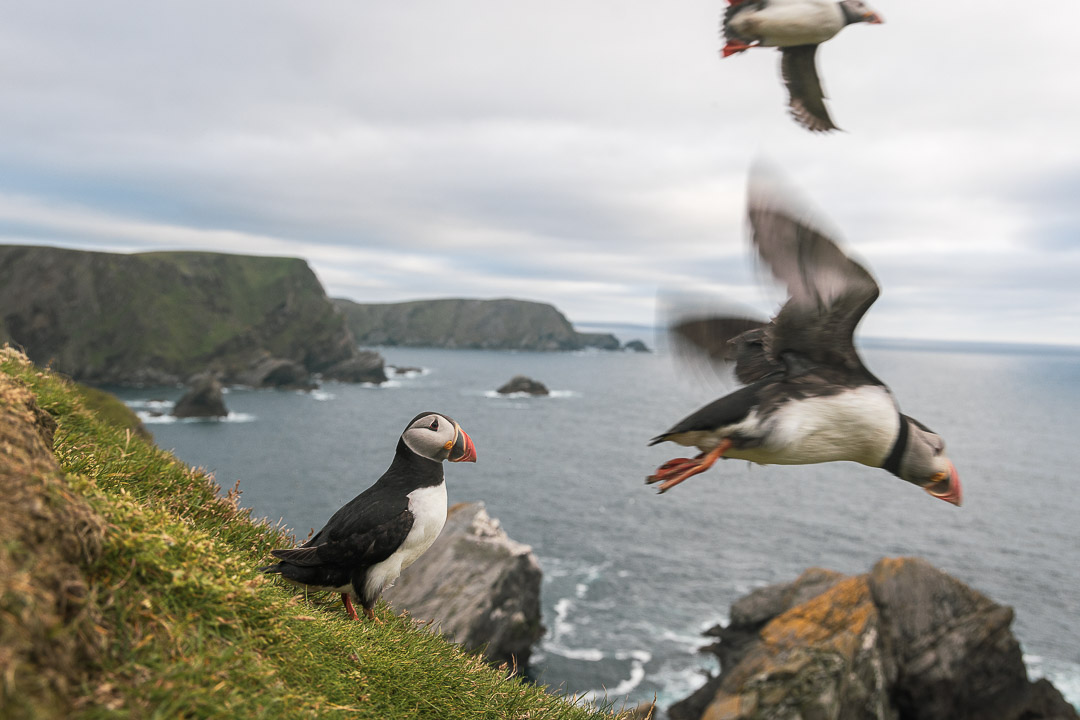 The rich coastline of Scotland plays summer host to the grand theatrics of the seabird breeding season. This summer has been no different, if not more dramatic than usual. Last year Avian influenza (flu) jumped from domestic flocks of wildfowl to wild birds. However, it wasn’t until spring this year that the full force of the outbreak began to be seen.

Heart-breaking scenes were witnessed along cliffs and colonies around Scotland’s coast, with two species in particular taking the brunt of the disease – gannets and great skuas.

With two of our summer photo holidays, St Kilda and Shetland, visiting prime seabird locations it was a little worrying wondering whether there would even be any birds left for our guests to photograph, as well as what impact our visits might have.

St Kilda was first on the cards, and despite challenging weather conditions, it never fails to deliver on drama. The most obvious thing we noticed was the massive decline in great skua numbers. The usual experience of being dive bombed as we walk across the steep slopes of St Kilda’s hills was a mere memory. With skua bodies littered around it was all too apparent the impact that bird flu has had on the population here.

Despite this stark reminder there was still plenty of bird life around for our groups to point their lenses at. In and around just the village itself a whole day can easily be whiled away watching the endemic St Kilda wren, wheatears, snipe, arctic skua, fulmar and the cheeky St Kilda mice.

The best place to see and photograph puffins on St Kilda is at the far end of the island, so with each group we stocked up on chef Martin’s excellent flapjacks and hiked the couple of hours up and down to the Cambir. Whilst you may see more puffins in other colonies, or get closer to them on Skomer for example, the experience of photographing puffins on the edge of the British Isles is unforgettable. The backdrops available on St Kilda are unique, and our guests can rest happy knowing that they are among a select few to have the privilege of sitting right on what feels like the fringes of the known world.

Leading up to this year’s Shetland trip I was admittedly apprehensive about running a commercial trip during a disease outbreak affecting our intended subjects. However, after chatting to other operators and locals in Shetland I decided that any impact we would have would be minimal if we were careful, and given the late stage of the breeding season.

Despite the concern I needn’t have worried. Whilst gannet numbers have been hit very hard across Shetland’s colonies, it appears the lack of the predatory great skua has led to an apparent increase in the number of puffins and wading birds. Across the main puffin locations I visit in Shetland, all offered the best sightings and opportunities I’ve had there since I started leading trips.

The long-term impact of avian flu on Scotland’s seabirds is unclear, but nature usually has a way of bouncing back, and with some species hit harder, others find space to expand. We’ve already got plans to return to both St Kilda and Shetland next year; witnessing our coastal seabird colonies is such a yearly highlight I’m counting down the days already!