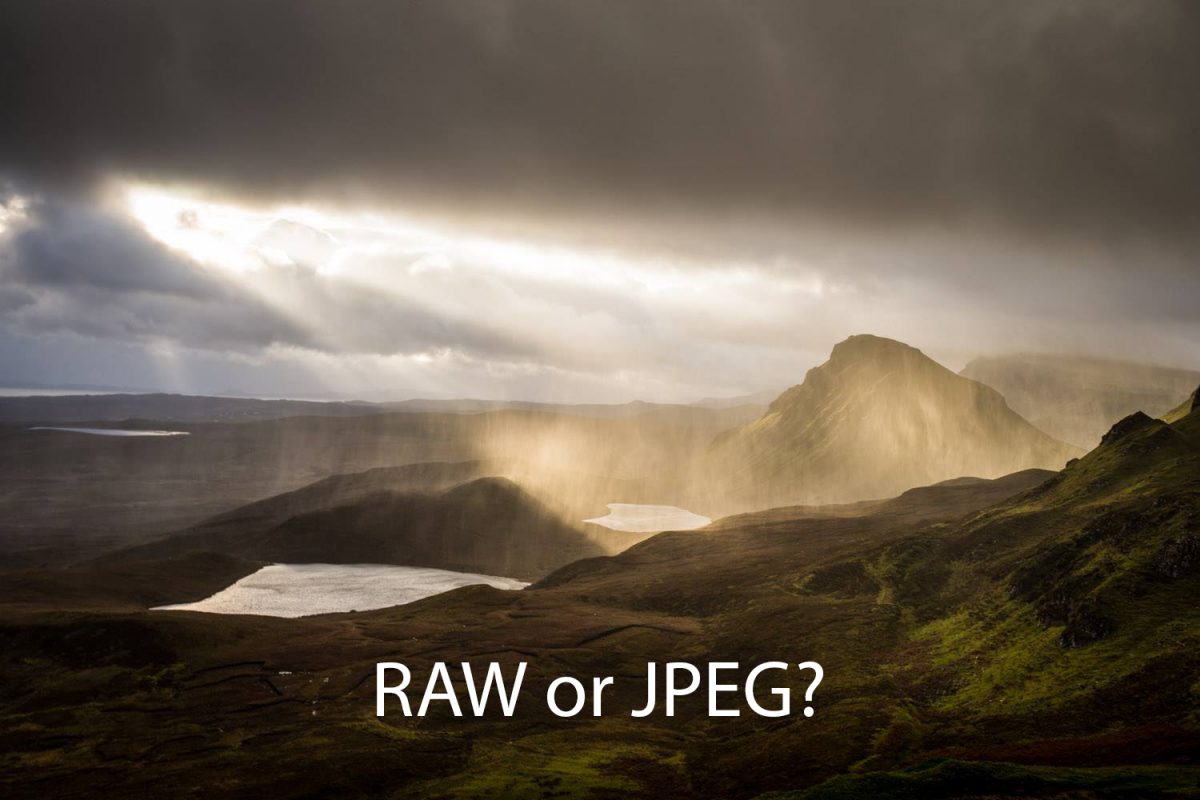 All cameras and even some phones offer the option to shoot in RAW. But what is RAW, and why should we use it?

The alternative is to shoot in JPEG, which is a universally recognised file – anything will read or display it. RAW files on the other hand are coded by each manufacturer, and are constantly being evolved with each new release of camera. This means that it is quite common for your computer to fail to recognise a RAW file, leaving you frustrated at not being able to view your photos. This is the main reason which puts users of shooting in RAW, but what is the real difference between the two formats?

When you press the shutter button to take a photo, all cameras record the image as a RAW file. If you have the camera set to record in RAW, this file is simply recorded to the memory card. If however you have your camera set to record JPEG, then the RAW file is edited by the camera and then saved onto the card as a JPEG file. When the camera edits the RAW file to create the JPEG file, it uses the picture profile settings such as White Balance, Contrast, Saturation, Sharpness, etc – all of which can be set by the user. The problem is that you are never going to want the same settings applied to every photo you take, yet this is exactly what the camera is doing when you shoot in JPEG. So to shoot properly in JPEG mode, you really need to alter all the picture profile settings in the camera each time you take a photo of a new subject or scene. This is not only very time consuming, but you are having to make these adjustments before you have taken the photo. Therefore, you cannot see how the changes are affecting the image without taking a shot and then adjusting the settings before taking another shot, etc. By the time you have reached the desired result, you would have probably missed the opportunity for the photo.

The real advantage in shooting JPEG files is for the immediacy of the finished result. Let’s say a friend who is getting married asks you to take a few photos of their wedding which they will post onto social media later that day. This is the perfect example of when shooting in JPEG makes sense, as you can set the picture profile settings in the camera so that they suit the scene, and then the camera is doing the editing for you as you take the shots. All you now need to do is transfer the images to them from the memory card and voila.

Using the same example, but this time your friend wants the photos to print after the event. This is when you would certainly want to shoot in RAW as you will have time to edit the photos in the subsequent days, applying individual adjustments to each image.

It is unusual to need the photos immediately after they have been taken, so given the luxury of a little time to edit the images, it is far better to shoot in RAW.

A RAW file is larger in data size than a JPEG (usually around two or three times the size), which means there is more information to work with when editing. In order to get a JPEG file as small as possible, the camera needs to compress the data and in the process of doing this, subtle information is discarded. Once gone, this information can never be recovered.

Above is an edited RAW file, only simple adjustments to the highlights, shadows, clarity and white balance have been made. Below you can see the JPEG file (shot simultaneously with the RAW) straight from camera. If you tried to make adjustments to this image it would be impossible to bring out the same detail in the shadows and highlights, whilst retaining image quality.

A RAW file on the other hand can never be edited and overwritten. You can only apply changes on top of the file. This way, all the information captured by the camera is never discarded. And this is the main advantage to shooting in RAW, as the files can be edited, re-edited, and edited again without any loss to the original data. A JPEG on the other hand gets compressed each time it is saved, which means more detail is being lost each time you make a change to the image, and as mentioned already, this lost detail can never be recovered.

Another real advantage to shooting in RAW is that it makes the photo taking process far simpler. You no longer need to worry about setting things like White Balance, as it is not embedded within the RAW file and can easily be recalibrated at the editing stage. This means you have less to think about when shooting a scene, which allows you to concentrate more on being creative and capturing the moment.

If you have little or no interest in editing your photos after you have taken them, then JPEG is certainly the way to go. However, in order to have maximum control over your images and bring out the potential in each and every one, you really need to apply individual and unique adjustments to each photo. This doesn’t have to be time consuming. I would say that I spend an average of around 20 seconds editing an image and I can get hundreds done in less than an hour. Other people love to get more involved and spend hours just on one image. There is no right or wrong – just personal taste, but regardless of taste, you should never edit a JPEG file, as all JPEG files are already edited.

Most cameras offer the ability to shoot in both RAW and JPEG simultaneously – basically saving both an unedited and an edited version of the same image to the memory card (see above). There are only a couple of reasons to ever do this. Firstly if you want both immediate access and usage to your images and the ability to edit them later when time allows. Secondly if you don’t yet edit your images at the moment but think you may in the future. For example, if you currently shoot in JPEG because you are not confident in editing, but you go on a once-in-a-lifetime trip, then you are best to shoot in both RAW and JPEG. This way you will then have RAW files to work with if you learn how to edit in the future. There is no other valid reason I can think of to shoot in both formats. Many people shoot RAW for their main images and then JPEG as a backup. However, backups only work if you have them on 2 cards, and why would you want JPEG files as your backups? Just shoot Raw to both cards if you want a backup.

Finally, it is important to realise that your camera’s screen cannot display a RAW file. If you are only shooting RAW and you press the play button on the camera, it shows you a JPEG preview rather than the RAW file. This preview uses the camera’s profile and White Balance settings. So although these settings are irrelevant to the RAW file, they still have an influence on the review you see on the back of the camera. If you shoot in RAW, my advice is to set your White Balance to Auto (AWB), as this then means the image you’ll see on the camera’s screen is going to look fairly natural. This setting is not embedded within the RAW file though, so can be easily recalibrated at the editing process without any drawbacks whatsoever.