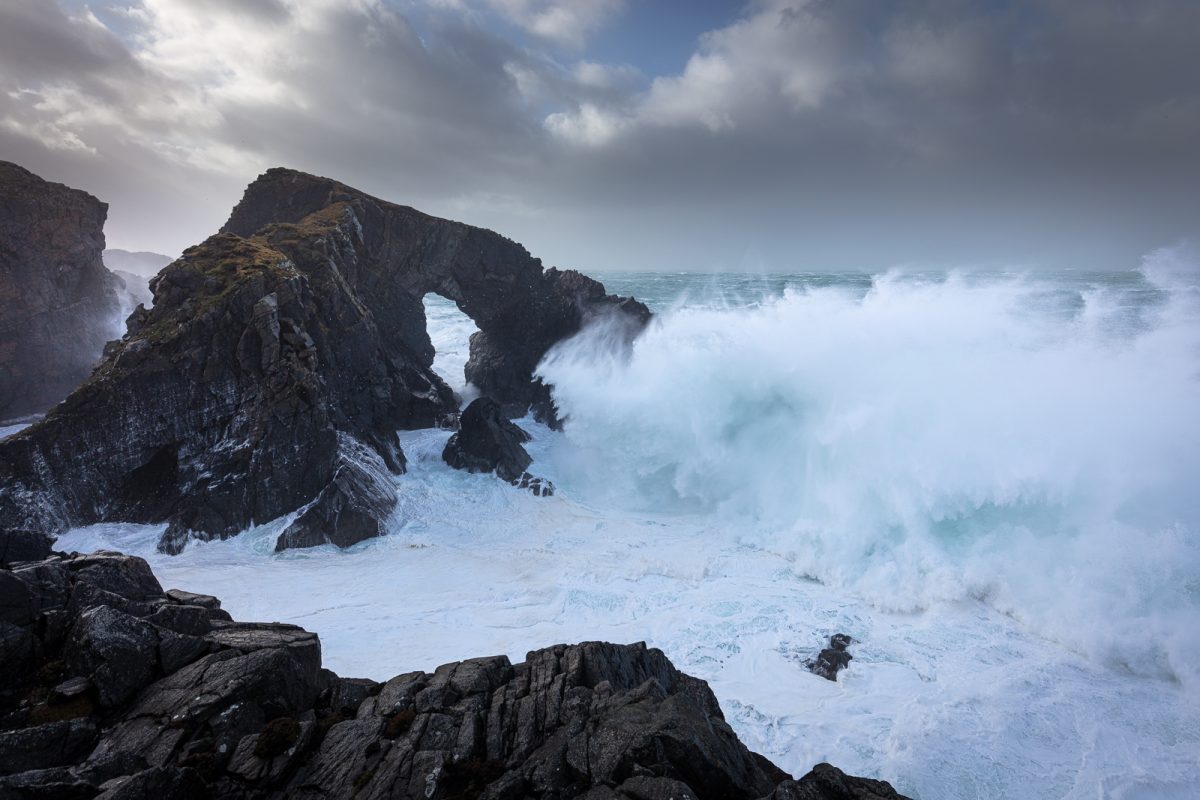 Each February and March we tend to spend a lot of our time on the Outer Hebrides. Unlike our home island of Skye which is relatively sheltered from the Atlantic, Harris and Lewis receive the full force of the ocean, so it’s the best place to go if you want to capture dramatic seascapes.

In between hosting a couple of our annual photo holidays, team member Marcus ventured out in some wild weather to try to capture the forces of nature in all their fury…

As I arrived at the end of the road to park my car, I could see the huge waves breaking over 100ft cliffs, so knew I was in for a rough ride. I could see a heavy squall coming in off the sea, so sat tight inside the car for a few minutes to allow the worst of it to pass. It felt like a rugby team was trying to rock the car backwards and forwards and the deafening sounds of the large hailstones on the windscreen and roof temporarily drowned out the radio. Luckily it was only a Will Young track, so nothing lost.

As quickly as it had started, the hail stopped. Just a few seconds later the sun came out to bathe the landscape in golden light, which looked all the more impressive against the inky black cloud which was now retreating to the east. Seeing my window of opportunity, I grabbed my bag and tripod, pulled my hood up, put my head down and set off along the coast.

Leaning sharply into the wind, I struggled to make much headway against the 80mph winds which were whipping in from the sea. Even though I was a few hundred metres from the cliff edge, the sea spray resembled being jet washed at close range as it stung my face every time I lifted my head to see where I was going. Just to keep things entertaining, every now and again the resistance of the sustained winds would suddenly drop for a few seconds without warning, each time causing me to fall forwards. Had it not been for the howling noise of the wind and the low frequency thumps as the huge waves crashed against the cliffs, I am sure I would have head Mother Nature laughing at me as I struggled forwards. What is usually an easy 20 minute walk took me almost 40 minutes, but the power of the waves ahead of me was too tempting to abandon my plan.

Upon arriving on scene, the power of the ocean was breathtaking. Locations which I have stood many times and admired the sea far below me were now being breached with each aggressive wave. Managing to find what seemed like a relatively safe area, I observed the next squall – a dark grey wall of anger heading my way at an impressive pace. As the wind gained even more pace, I quickly searched for a rock to shelter from the impending onslaught of high velocity hailstones.

Once this had passed, the light erupted again, providing that incomparable quality of light which you only get after a storm. As each wave exploded against the rocks, the white water being lit by the sun was as impressive as any fireworks display.

Although not raining, the constant sea spray ensured that it was impossible to take the lens cap off the camera without the front element being immediately contaminated. The combination of water on the front of a lens and shooting into the light is a sure way to ruin any photo. Luckily I was prepared and had packed several high absorbent lens cloths. With the camera on the tripod and aimed vaguely in the direction of the action, I frantically wiped the front of the lens before timing my hand being removed from the shot at the precise time I pressed the shutter. This was the only way I had an outside chance of getting anything without dots of water all over it.

The waves would come in sets of three or four humungous breakers, interspersed by a group of less aggressive ones. However, even the smallest ones would have been more than impressive on any other day.

I tried, somewhat optimistically, to extend my exposure times to around 2 seconds in order to capture some movement in the waves, but with the sea spray right in the face of the lens and the ferocious winds whipping around me, this was maybe a little too ambitious.

The camera was dripping with salt water – not the best way to look after your gear, but this wasn’t the environment for anyone precious about their gear. With water all over the rear screen, I couldn’t even see what I was getting. I could just about make out the histogram which assured me that my exposures were okay, but as for checking for sharpness or for lens contamination – that was something which was going to have to wait until later in a drier environment.

My game plan was to take as many images as possible, with the theory being that the more I took, the better my chances were of getting a technically good one somewhere. Conscious of the anger of the seas below me, I stood further back from the cliff edge than I would usually do, but the direction of the wind blowing me back away from the water provided a little assurance that I wasn’t going to go for an unplanned swim.

Just then, and without warning, the wind suddenly changed direction and was immediately on my back. I fell forwards with one hand on my tripod and braced myself with the other hand on a large rock. In my peripheral vision, I saw a large black object flying through the air. Looking up into the sky, squinting as the sea spray showered against my face, I identified the object as my camera bag. I checked behind to confirm my observation, and where I had left my bag, there was now just an empty rock.

Looking back towards my airborne bag, I observed it spiralling like a sycamore seed and as it did so, objects were being flung outwards in all directions from the centrifugal forces. I quickly identified these objects as my lenses and spare camera body. Not that I thought otherwise, but I can now confirm that these do not fly very well, or float very well.

Just as quickly as the wind had changed direction, it did so again, with the lighter objects being blown back towards me onto the cliffs. The bag however, rapidly lost altitude before plunging into the boiling torrent below me. After observing it being pounded against the rocks for a moment, I decided to go to investigate what items had been returned to me by the offshore wind. I can confirm that I am still the proud owner of a couple of filter cases, a memory card holder, and a pouch of adaptor rings worth around £15. Sadly I can confirm that the sea claimed a Canon 5D IV body, a 35mm f/1.4 II L, 16-35mm f/4 IS L, 70-200mm f/4 IS L, Mindshift bag and a few other auxiliary items such as cable release, filter holder, spare batteries and many other things which I am slowly realising I no longer have.

Looking on the bright side, I still have a tripod, 5Dsr and Sigma 14mm f/1.8 lens which I had been using at the time. As I watched my bag being ripped apart as it was repeatedly smashed onto the rocks below, I observed the scene and realised that I needed to continue taking photos, as this was too good an opportunity to miss.

The light suddenly came good again and lit up a scene which looked apocalyptic yet beautiful at the same time. With my lens covered in salt water, I reached for one of my many lens cloths to them realise that they were all in the bag. So I had to concede that despite being faced with one of the most dramatic scenes I have ever witness, and despite having the ultimate camera and lens in my hand to record such a scene, I was unable to take a photo due to the lack of a lens cloth!

I put my hand inside my jacket to feel how dry my teeshirt was, but as I suspected (and had been for a while), that was soaked too, as were my socks and dare I say it… my underpants. There was absolutely nothing dry I had to clear the water from the front of the lens, so finally had to admit defeat.

As I started the lonely walk back to the car, with that feeling that you’ve left something behind, I witnessed some of the most amazing light I have ever seen – black skies being undercut by golden light of a quality which I didn’t know existed. I’m not sure what I felt worse about – losing £7,000 worth of gear or not being able to take shots of the scene before me, despite having a camera in my hand.