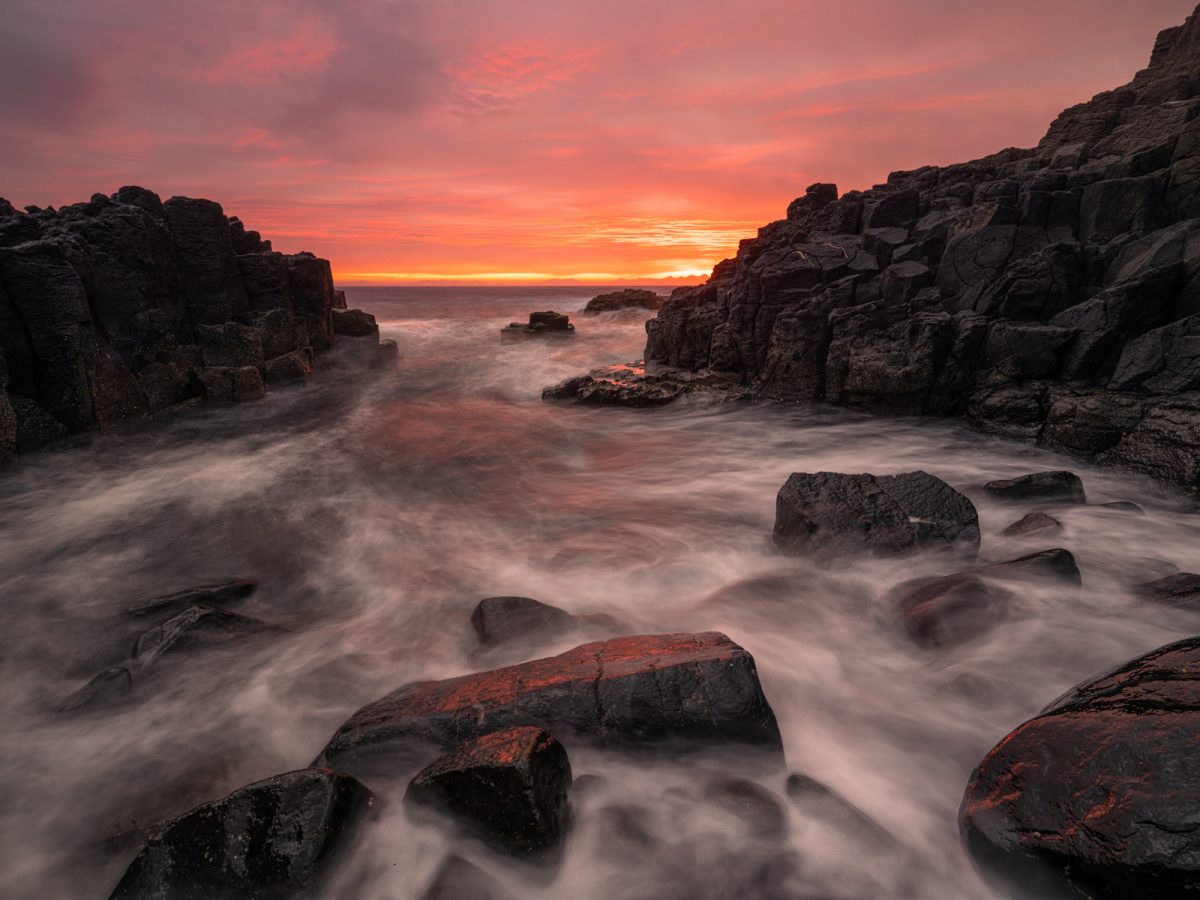 Words and pictures by Marcus McAdam

We’re all familiar with the term ‘practice what you preach’, but here at Mc2 we prefer to preach what we practice. As a photographer, one of the worst things you can do (in terms of achieving a successful image) is to go out without a plan. If you head out with your camera without a clear plan in your mind as to what you want to shoot, the chances of capturing something worthy of a #WOW are drastically diminished.

It’s far better to build up a list of subjects or locations which will work in a variety of conditions and then repeatedly visit these places when the conditions are favourable. One such place on my list was just a few minutes’ drive from my home, followed by a 10 minute walk, so I can get there at reasonably short notice. More to the point, if I make a visit and end up returning home empty handed, then it’s no big drama.

The Cave of Gold is an interesting section of basalt rocks, facing to the north west, which makes the location ideal for sunset during the summer months (assuming you want to shoot into the light). There’s one particular viewpoint which looks out through the rocks and between May and July the sun sets within this window. For some time, I’d had a vision in my mind of this very view with a dramatic red sky, with waves crashing over the foreground rocks. To bring this vision to reality, all I needed was the right conditions, but this is where the problems start.

With it being early June, I knew I was well within the calendar window, so that’s one of the sixes sorted. I also knew that I need to be there at sunset, so that’s another six in the bag. It’s the final three which were always going to be the tricky ones, and for these it really is a case of repeatedly turning up when the conditions show even the remotest of potential. This is exactly what I set about doing over the past couple of weeks.

My first visit showed great promise. The sky was looking good, with lots of cloud, but crucially there was a small break on the horizon to the north west, providing the essential gap for the light to get through and light the scene. The sea state was also good, with plenty of movement in the waves, whipped up by moderate winds from the north. However, upon arriving, I saw that the tide was slightly too high and the waves were slightly too ferocious to allow me to get into my desired location. So I changed my plan and shot a different composition instead. The shot turned out good, but it wasn’t the shot I had visualised.

As it happened, the sky never developed any colour anyway, so I was 2 sixes short of my goal. However, 3 out of 5 ain’t bad, and it gave me encouragement that if I kept persisting, the other two sixes would eventually be face up.

The following day the conditions weren’t looking as favourable, but I decided to go anyway. This time the tide height was perfect but there was little cloud in the sky and the state of the sea was too heavy. To get the shot I wanted, I would need to shoot from a few inches in front of the crashing waves, but when the seas are heavy, there can be a difference of several metres between each wave, making it impossible to set up the camera close to the water. Again, rather than waste a journey, I shot another composition, but returned without my planned shot.

The following attempt saw everything fall into place except a lack of a colourful sky, but with only one of the dice not playing ball, I felt I was getting closer.

A couple of days later, the conditions looked promising, but as I left home, rain started to fall and I could see that the sky was getting increasingly darker. With two hours before sunset, the chances were that the favourable conditions would last seemed remote. But to win this game, you need to have a positive mindset, so I set off with a determined stride back to the Cave of Gold.

As I made my way along the cliff tops under heavy skies, I could see a clear break on the western horizon and there was enough movement in the sea to create the white water I needed, but not too much to prevent me from getting close to it.

As I arrived on location, the height of the tide was good. I had 4 sixes so far, now all I needed was to roll a final six for a Royal Flush.

Once I had set up, it was just a case of waiting. It continued to lightly rain, not enough to get wet, but enough to be annoying. Due to the fact that I had to have the camera facing into the wind, tiny drops of rain were accumulating on the front of the lens, preventing me from being able to take clean shots. I persisted anyway, getting through lens cloths like a mirrorless camera gets through batteries.

Although the shot I wanted was at least an hour away, it’s always good to take other shots and experiment with alternative compositions to pass the time. With very little colour in the scene, I took a couple of black and white images which emphasised the textures and shapes within the scene, especially the sky, which was very detailed.

At times it looked like the small gap in the cloud on the horizon would disappear but it held out. Eventually the sun broke through, beautifully lighting a rock right in front of the camera. The problem was that it was still lightly raining, causing the front element to be constantly peppered with a light mist. No matter how frantically I wiped the lens, the very moment I took my hand away to take a shot, the front element would once again be covered in a mist of droplets. When shooting into the light, even the tiniest of droplets will show up like a beacon – ruining the image. To say it was frustrating would be an understatement, and had you been within half a mile of my location, you would have heard lots of swearing.

Rather than missing the light, I decided to change my location which meant I could shelter myself from the rain behind a cliff. The composition wasn’t my intended one, but at least I could get a clean image this way.

Once the sun dropped below the horizon, the rain finally eased off. I relocated to my original position and waited for the colour to develop. At this stage I was confident it would happen. I already had 4 sixes, and it felt like the final one was a loaded dice – when rolled, it was only ever going to be a six.

The colour lasted for what seemed like an eternity. I am used to taking my photos opportunities in fleeting light which may only last a second or two, but here I had the chance to take multiple shots in both upright and landscape formats, waiting for the perfect wave to crash over the foreground rocks. I even had the chance to take phone shots and upload a live update to social media – this was luxury!

Eventually the colour began to fade, so I packed up and started my climb up the cliff. As I gained height, the perspective of the scene changed and the Outer Hebrides became more prominent in the background. The shot was there for the taking, so I decided to get everything set up again, this time with a longer focal length.

Being almost dark now, the exposure time was 15” at f/8, ISO 100. Surely this was the last shot of the day, so I packed up and continued the walk back to the car.

Appearing at the top of the cliffs, I opted for the coastal path which hugs the cliff tops in favour of the shorter option with less impressive views. As the rounded the first headland, I looked down and knew that everything was going to have to come out of the bag again. Camera out, change lens, attach filter, set up tripod, compose, focus, meter, expose, pack up… this was now a well rehearsed routine.

As I approached the car it was approaching midnight and in the dark, I had struggled to avoid the minefield of cowpats. That was a minor concern which paled into insignificance in the knowledge I had rolled 5 sixes and could finally draw a line under the Cave of Gold and move onto the next image on the wish list. The bad news is, that one requires an extra dice!