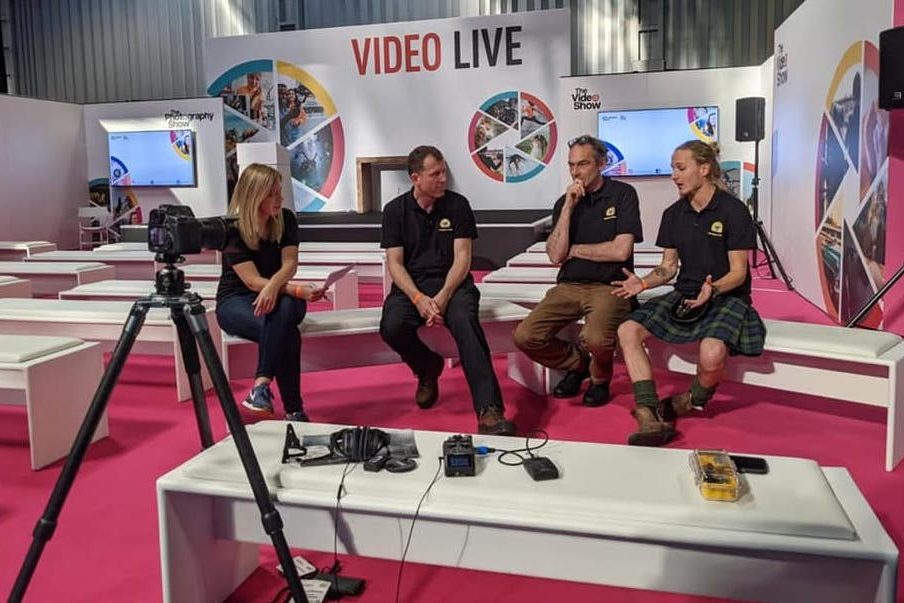 This time last week we had just arrived back home after a fantastic four days at The Photography Show in Birmingham, UK. The annual event was back on after being cancelled less than 2 weeks before it’s scheduled date in March 2020 and we were excited to be taking part after 18 months of lockdowns and restrictions which meant that barely any of us had travelled outside the Highlands (or in James’s case, Devon) in the time since.

We’d loaded up on merchandise and magazines, made sure Harry’s kilt was safely secured, lovingly placed our new team member, Ken the Mannequin, in the back of the van, and pointed ourselves toward the Skye Bridge.

Myself, Marcus, Harry, Joyce (who many of you will know from “behind-the-scenes”) and James were on duty this year. We had to leave Nick and Ben behind to run our workshops – sorry guys, the wonders of the NEC will just have to wait! We had our stand promoting our workshops on Skye and our Worldwide Explorers trips around the world and this year we were there under the banner of Photography Online as well. Literally. Our giant team photo was affixed with copious amounts of velcro – and a few rather loud expletives.

The show was a little smaller than usual this year for obvious reasons, but it still attracted big exhibitors and thousands of attendees. Four days of leg-numbing standing was made worth it by getting to meet so many of our existing customers and particularly, our Photography Online viewers and supporters. It’s not often you get to do that and it was great to put faces to YouTube comments and actually have face-to-face conversations once again.

Of course, we were also there to do some filming for Photography Online including interviewing Canon about their new offering, the R3, and Olympus regarding recent rumours of their demise. We filmed a wee Q&A with the team based around many of the questions we are frequently asked (that’s coming up in our next episode) and we also managed to host our monthly webinar, Mc2 LIVE, from our hotel’s delightful purple conference room. I think we were above the laundry – the floor would start shaking every few minutes which was rather distracting!

Walking around the exhibition centre is always fascinating. Besides trying out gear and practicing your skills on Shutter Street or the Action Arena or on some of the models wandering around, there are always new things being launched at the Show. Ilford’s new pop-up darkroom was a huge hit, Kase’s new Double Grads (shout-out to the inventor *cough – Marcus – *cough), Pinsta Camera’s all-in-one pinhole camera, darkroom & enlarger and loads more. Check out our last Photography Online episode for all those and more…

The talks are always a highlight too, with some great speakers from all genres. Street, landscapes, portrait, commercial, wildlife, video – everything is represented. None of our team were speaking this year, mainly because of logistics and timings, but next year is another matter.

Harry’s kilt was a roaring success, I mastered the inadvertent “10-second selfie”, Marcus can die happy having been asked to sign a magazine, James’s handshake was left hanging by someone making a beeline for someone else (which made our day by ruining his) and Ken was kidnapped and subsequently rescued in a daring operation (we fished him out from underneath a tablecloth in a “fun-loving” neighbour’s stand) so I think I can say that a great time was had by all.

Keen as we were to come down to the Show, we were all ready to get moving by the last evening (or maybe we just needed a seat) and tore down our stand in record time, chucked Ken into the back of the van (he left the stand in two pieces and arrived at the van in five – thanks, guys) and headed back north and south.

A manic few days of editing later and we’ve settled back into the normal routine. That is to say, more filming, editing, writing, shooting, designing, teaching and the usual “slow pace” of life. We’ve got exciting plans for upcoming new trips and episodes of Photography Online so watch this space…

Once again, a massive thanks to everyone who was able to come by and say hi. It was so great meeting you.