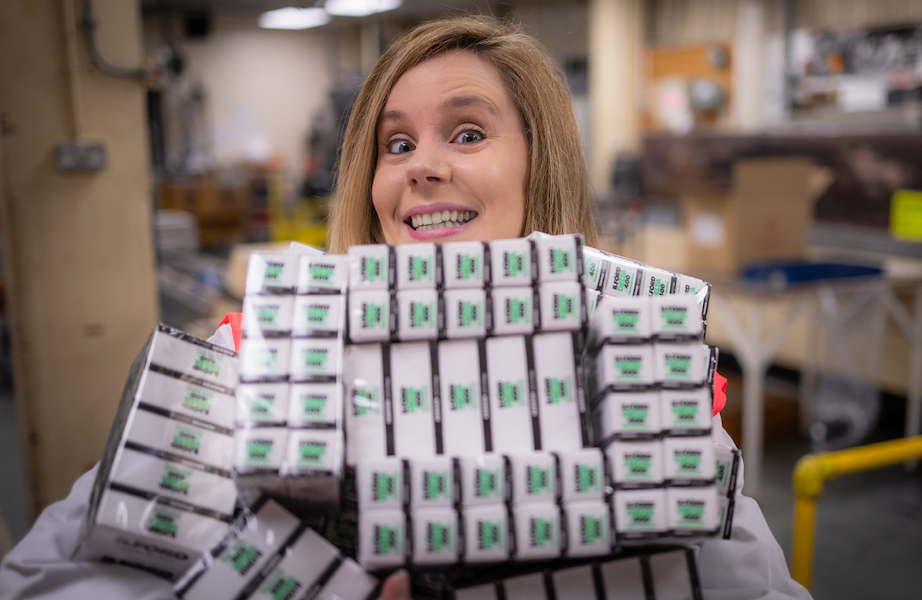 Like so many people, my first experience of photography was on a film camera and my favourite film was anything of the black and white variety, particularly from Ilford. So the prospect of going down to film at the factory where it was all produced was an exciting one.

As soon as we pulled up to the Ilford gatehouse and received our maps of the complex, I realised that there was a lot more to the operation that I had realised. I had envisioned a decent-sized warehouse building or two, maybe a dozen employees and several machines plopping out the legendary film canisters.

The true scale of what is required to produce everything from 35mm film to 50 inch photographic paper is far greater. The 50-acre site in the village of Mobberley in Cheshire houses multiple factory buildings, as well as a massive warehouse and distribution centre, admin buildings, commercial lab and many mysterious scientific laboratories. In its heyday in the 90’s, Ilford employed over 2000 people. It now employs just over 200 and every single one is needed as film photography sees a major resurgence and the Ilford team does its best to keep up with demand.

We were met by Matt Parry, who will be accompanying our new film-only trip to the Isles of Harris & Lewis next winter. Compared to most Ilford staff, Matt is a relative newbie with six years under his belt. Many of the staff in Mobberley are in their fifties and above, testament to the decades-long service which is normal here, and the sense of family that is obvious as we walk around the site.

Bedecked in slightly too large white lab coats and hi-vis vests (in a fetching fluorescent pink), Marcus and I headed to the first building and Matt explained that Ilford had been producing their hugely popular films since way back in 1879. Starting in Ilford in London, the site in Mobberley was acquired nearly a century ago in 1928.

The Emulsion building was fascinating. After squishing some of the raw emulsion (silver halide dispersed in gelatine) between my fingers, Andrew Cross, veteran of 34 years and the plant’s Technical Manager, showed us around his building. Due to the nature of what happens inside, we couldn’t actually see a lot of what was going on, instead looking to the diagrams of massive machines we were assured existed just feet away from us behind the long walls. Inside, men and women worked in pitch darkness to create the virgin rolls of light-sensitive film.

Only in the powerplant-esque control room did we get a glimpse of what was actually happening, as half a dozen supervisors monitored operations and checked alarms on an array of screens in front of them. In one corner, a screen showed a grainy infra-red feed from inside the room and we caught a ghost-like glimpse of one of the men inside as he worked. We were told later that if we were to ask any of the staff who work in the light-sealed rooms on site to show us what it is they do – with the lights switched on – they would have to close their eyes, as everything is done purely by touch.

The huge rolls of film that are produced get checked by hand (strips from each end and not the whole thing obviously) by a team of quality control staff, as well as by electronic methods. They take a huge amount of pride in the quality of the product that is created here on site.

As we walked around the (mostly older) buildings, I began spotting an abundance of “retro” safety posters dotted around. I’m not entirely sure if they were meant to be funny but they certainly appealed to my sense of humour!

As we walked between buildings we saw the huge “coffins” lying together – metal containers used to hold the massive rolls of now light-sensitive film and transport them between buildings. Once there, the giant rolls are sliced up (again in pitch black rooms) into giant 35mm and medium format rolls, known as “pancakes” here at Ilford.

Everything that can be recycled is recycled on site. Rejected film is sent to be stripped of it’s silver-nitrate to be used again. Used chemicals have their own recycling process too. It’s a fantastic system.

The Finishing building is where the fun happens. Gaynor Hill, Finishing Manager (39-year veteran), showed us around her factory where a multitude of machines brand and sprocket the film, cut them to size, poke them into canisters, wrap them in foil and box them up, ready for distribution. Approximately 25,000 rolls of film are produced on site every day and shipped worldwide via their massive distribution warehouse, and that is just barely keeping up with the burgeoning demand as the appetite for all things analogue increases.

With Matt for a brief while that morning was Hannah, a true Ilford baby, with just one month under her belt. Having studied photography at university and fallen in love with the darkroom, she described working here as an absolute dream job. If the example of the many friendly employees we passed that day is anything to go by, I doubt if her enthusiasm will abate anytime soon.

You can check out the full video on our Photography Online YouTube channel.